watch 01:03
'True Blood' Profile: Andy Bellefleuf
Do you like this video?
Play Sound 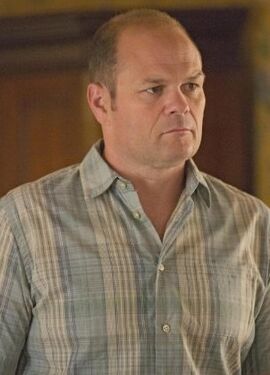 Andy is not always a very responsible character; this may be due to having a spoiled upbringing. While a relatively competent police officer, he has little confidence in his abilities because he feels nobody gives him full respect. As a result, when he forms a hunch, he will doggedly continue to back it up, even when the world turns against him. This explains his blatant hostility towards Jason Stackhouse (the major suspect in the Drew Marshall murders) and his subsequent swell of confidence when Jason is framed, but his confidence is deflated after he is ultimately proved wrong, leaving the town even more contemptuous of him than before. Over the next season, Andy once again shows his stubborn streak, but nobody pays him any heed- since he has turned to drinking and more and more of them are falling under Maryann's spell. When Jason returns to Bon Temps, they put aside their feud and begin working as a team; Andy's now-pessimistic attitude helps tone down Jason's optimistic, military attitude, showing Andy that he is able to work with people better than he can alone; thus, when Jason accidentally kills Eggs, Andy quickly and effectively takes charge of the situation. In season Three, he is shown to be a much better cop.

It should be noted that, for all his aggressiveness towards suspects who were clearly innocent and beyond his reach, Andy is by no means a bigot- quite unlike his predecessor, Sheriff Bud Dearborne. He has never exhibited Bud's blatant prejudice towards Shape-Shifters, vampires or werewolves and has taken great efforts to take down the anti-Super group the Obamas. Nor is he racist towards African-Americans, as some of the people in town are. When Tara found out that Eggs was killed by Jason and that Andy had taken the rap for it (not revealing that Eggs had not been responsible for his crimes, which made Andy look like the town hero) she confronted him. Without asking her to keep the secret, Andy admitted that neither Jason nor Eggs had been fully aware of their actions, tearfully expressing his regret at being unable to save Eggs' life.

Andy has shown to be overwhelmed by his unexpected parenthood, especially since his half-fairy daughters are literally growing up in a matter of days. Despite this, he has continued to show good character as a sheriff. He apologized to Bill for the anti-vampire measures the state government makes him enforce (which he genuinely thinks are unfair) and tentatively attempted to make amends with Holly.  However, the deaths of three of his daughters at the hands of Jessica (unintentionally) caused him to develop a deep feeling of anger for vampires; he arms his house against them and acts paranoid and hostile when encountering them.  Even so, he does not commit violence or hate crimes against vampires, and most of his measures were meant to protect his daughter.  When Jessica came to apologize and offer free protection for his family in the Season 6 finale, Andy pointed his gun at her, knowing she was the one responsible for his children's' deaths.  However, he was still unable to kill her and instead slammed the door in her face.

In flashbacks Andy has shown great care for his cousin Terry. Terry has suffered from his experiences as an Iraq veteran and Andy convinced Sam to give him a job as a chef. This eventually reconnected Terry to the Bon Temps community he lived in.

Retrieved from "https://trueblood.fandom.com/wiki/Andy_Bellefleur?oldid=145036"
Community content is available under CC-BY-SA unless otherwise noted.