And When I Die

"And When I Die" is the twelfth and final episode of Season 4 of the HBO original series True Blood, and the series' forty-eighth episode overall.

It’s Samhain, Wicca’s greatest holy day, and spirits of the dead surface in Bon Temps, giving Sookie some valuable allies to combat Marnie’s newest incarnation. Lafayette’s latest medium encounter imperils his relationship with Jesus; Jason finds confession good for the soul, but not the body; Alcide makes a heartfelt appeal to the woman he loves; Terry receives an unexpected visitor at Merlotte’s; Sam and Luna envision a storybook ending, for once; Nan wears out her welcome with Bill and Eric. As Season Four comes to a shattering conclusion, Debbie confronts Sookie and Tara with deadly consequences, and the denizens of Bon Temps brace for a new crisis with a familiar face.

"We are not fucking puppy dogs!"
― Bill Compton

It's Samhain, the Witch's greatest celebration, also known as Halloween. Lafayette has been possessed by Marnie's spirit without anyone knowing. Jesus apologizes to Lafayette about pushing him into Magic before he was ready. Marnie makes Lafayette stab Jesus in the hand with a fork, which revealed her presence.

Sookie is in her kitchen and sees her Gran's dead body on the ground. The corpse vanishes as Tara comes in. She tells Tara that she feels her Gran was with her.

Sam attends Tommy's funeral with Mrs. Fortenberry. She tells Sam that, "While Tommy wasn't my flesh and blood, he was a son to me, and Sam you should call me 'Momma' from now on."

Jason goes to Hoyt to confess his affair with Jessica. Hoyt violently beats him to the ground and tells him that there's something missing inside Jason. He walks away with Jason muttering his apologies.

Possessed by Marnie, Lafayette ties Jesus to a chair. Jesus tries to reason with Marnie but she ignores him, refusing to accept that Antonia wanted to leave her. Jesus asks what she wants, and she replied that she wants his magic.

At Merlotte's, everyone is celebrating Halloween. Sookie comes in to talk to Sam. He realizes that Tommy, while in Sam's form, had fired Sookie. He chooses not to tell her and gives her the job back.

Marnie threatens Jesus with Lafayette's life if he doesn't give her his powers. Jesus finally gives up and summons the Demon inside of him. Lafayette then stabs him in the chest and licks the blood off the knife, transferring the Demon's powers to him.

Patrick Devins, an old friend of Terry's from the Marines, comes looking for him at Merlotte's and becomes acquainted with Arlene. Alcide comes in and tells Sookie that he has broken up with Debbie. He tells her that he was seeing clearly for the first time and that he wants Sookie to do the same. Getting what he's implying, Sookie says that she can't change who she loves even though she's tried. Alcide simply says, "Try harder."

Tara goes to check up on Lafayette and finds Jesus' body inside. She drives to Merlotte's to warn Sookie and Holly. They predict that Marnie would go after Bill and Eric and drive over to Bill's house. They find both vampires chained in silver and tied to a post over a pile of wood. Lafayette/Marnie appears and Tara begs her to stop. She refuses and sets fire to the wood under Bill and Eric. Sookie uses her gift to push Lafayette out of a circle of salt that Holly had made and his face becomes demonic.

Holly, Sookie, and Tara begin chanting a spell that creates a barrier around the circle and causes spirits from the Bon Temps Cemetery, including Antonia and Sookie's Gran to appear in front of them.

Antonia blows out the fire like a candle and Gran pulls Marnie out of Lafayette's body. Antonia then persuades Marnie to forget her rage for the vampires and come to the afterlife with her. She explains that life is pain and that afterwards, there is peace. She convinces Marnie the vampires do not win in the end, as they are trapped in this world. After hearing this, Marnie releases her hate and agrees to depart. Sookie asks her Gran to stay, saying that she's lost and doesn't know what to do without her. Gran replies that she can't stay and that Sookie knows in her heart what to do. She then goes with the other ghosts back to the netherworld.

At Merlotte's, Arlene sees Rene's ghost. He tells her to run and vanishes as Terry comes out.

At Fangtasia, Pam throws a fit over Sookie stealing Eric away from her and bursts into tears over losing her Maker and is comforted by Ginger who is dressed as a nurse and has a bite mark on her breast.

At Sookie's house, Tara is trying to console Lafayette over what happened to Jesus. Lafayette blames himself for what Marnie made him do. Later that night, Jesus appears to Lafayette and tells him that he's fine with what happened. Lafayette asks him how he's meant to live with what he did. Jesus replies, "Just keep breathing" and leaves.

Sookie feeds her blood to Bill and Eric to heal their injuries. She admits that she is in love with both of them but says that she can't be with either of them. They try to stop her but she stands by her choice and walks out of Bill's house, sobbing.

At Merlotte's, Andy gives Holly some flowers, apologizing for the disaster at their date and admitting that he was on V. Holly forgives him and asks Andy for a hug.

Back at Jason's house, Jessica and Jason talk about their relationship. Jason asks if there's a part of him that's missing and she says that there isn't. She leaves after a few minutes. Someone knocks on the door. Jason goes to answer it and is shocked to see Steve Newlin standing there, baring newly made fangs at him.

Alcide gets a call from a work colleague of his about a hole being dug in the ground and goes to investigate. He discovers that the worker has been glamoured and that Russell Edgington has broken out of his imprisonment in concrete.

At Bill's house, Nan Flanagan arrives with three V-Feds and tells Bill and Eric that she quit the AVL and The Vampire Authority. She also tells them there's a price on their heads and that she requests they join her in a mutiny against the Authority. They respond by killing the guards and Nan.

Debbie breaks into Sookie's house with a shotgun. She points the gun at Sookie but before she fires, Tara pushes Sookie out of the way. The blast intended for Sookie hits Tara in the head. Sookie wrestles Debbie to the ground and shoots her in the face with her own gun. Sookie cradles Tara's body in her arms, screaming for help. 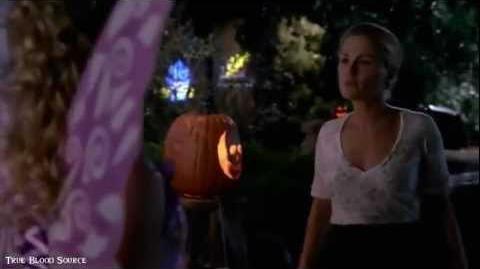 Arlene Fowler: "You two wanna go trick or treating at the trailer park again getting bags of empty Coors cans and food stamps or do you want candy? Your choice."

Bill Compton: "I liked you better when you were brain-damaged."

Pamela Swynford de Beaufort: "Sookie... I am so over Sookie and her precious fairy vagina and her unbelievably stupid name! Fuck Sookie! I've been with Eric over 100 years. I've watched him seduce supermodels and princesses and... Spit out their bones when he is finished. How can someone named Sookie take him away from me?"

Sam Merlotte: "Nobody taught Tommy how to love somebody without hurting them."