watch 01:42
'True Blood' Profile: Amy Burley
Do you like this video?
Play Sound 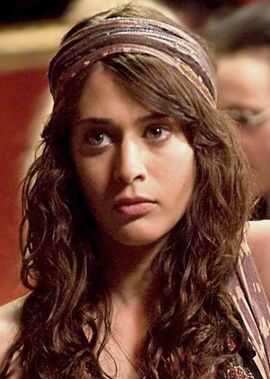 "We honor Gaia, and seek the deepest relationship to her. By taking the blood of the night into our bodies we water the flowers of our souls. Nothing is real, Everything is permitted."
―Amy Burley, to Jason Stackhouse (before doing "V")[src]

"Did you know that my sophomore year of college I walked away from a full academic scholarship so I could go to this poor Guatemalan village. Helped them build their very first irrigation system. So they could have a fresh water. Crops, that didn't give them dysentery. So don't you dare get morally superior on me. I am an organic vegan and my carbon footprint is miniscule."

Amy was shown as being very environmentally conscious. She talked at length about how everything was inter-connected and that all living things shared the same energy. This is how she justified tormenting and killing a vampire, claiming that they were not living creatures and were therefore wasting energy. Amy was a vibrant, articulate and somewhat of a systematic person, and was also a V addict, which involuntarily led to her death.

Amy Burley came to Bon Temps after dropping out of college to tour America, much to her parents dismay. Jason Stackhouse met her at Fangtasia while looking for a place to buy V. Amy overheard Jason asking about V and quickly took him out of the club before other vampires could hear him.

The two spoke and got to know each other and Jason took her back to his home where she taught him how to ingest V and how the effects can make you feel simply amazing. After a V-fueled evening with Jason, the two decided to start a relationship and Amy agreed to stay in Bon Temps. She was given Dawn's job at Merlotte's after spontaneously helping out waiting tables during a particularly poorly staffed evening.

Amy was addicted to V, as was Jason at the time. Amy drove Jason to help her kidnap Eddie Gauthier, the vampire from whom Lafayette was getting V. While holding him in captivity, she nearly starved Eddie, drinking his blood and keeping him painfully restrained with silver. She justified her treatment of the vampire by insisting that he was not a living being and didn't deserve the same rights as humans. Eddie started to warn Jason about the derangement of his girlfriend which led to Jason trying to free him.

This provoked Amy to stake Eddie, rationalizing her actions by saying that he would have killed them. However, Jason had bonded with Eddie and was saddened by his death. This strained his and Amy's relationship. Jason decided that he and Amy should give up V. Amy agreed as long as that they could get high one last time.

While on their final V trip, Drew Marshall entered Jason's house and strangled Amy while Jason was unconscious next to her.

Jason has a flashback on Amy and Jason's V trip of them kissing in the rain, and another brief flashback when he sees Sarah Newlin wearing fake vampire fangs, remembering when Amy staked Eddie.

Retrieved from "https://trueblood.fandom.com/wiki/Amy_Burley?oldid=145039"
Community content is available under CC-BY-SA unless otherwise noted.