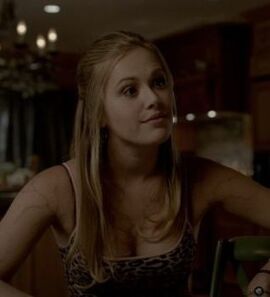 "You make me sick. You made me sick. Not just me. No. That wasn't enough for you. You made everybody sick, the whole fuckin' world."
―Amber to Sarah[src]

Amber Mills (née Crabtree) was the vampire sister of Sarah Newlin on the HBO original series True Blood. Played by Canadian guest starring actress Natalie Hall, Amber made her debut on the episode "Lost Cause" in the series' seventh, and final, season. Playing a recurring role through the same season, Amber met an untimely demise in the Season 7 episode "May Be the Last Time".

She and her sister were once idealistic and had a strong sense of justice. Amber was a loving person who cared deeply for Jeremy. After she reconciled with her sister and was healed, she was able to forgive her and remained loyal to her even under torture.

Amber was the older sister of Sarah Newlin and eldest daughter of Nancy and Paul Crabtree. She described herself as always having been the black sheep of the family.

According to Sarah in Season 2, she and Amber had marched together for vampire's equal rights following the Great Revelation. ("Scratches")

Sarah had earlier remarked that Amber had become addicted to vampire blood and disappeared, presumed to have been killed by vampires. This was later revealed to be a lie. In reality, Amber fell in love with a vampire named Jeremy, who later became her maker. Ashamed at having a vampire in the family, the Crabtrees effectively disowned Amber and concocted the lie that she had been killed. When Sarah married into the powerful and famous Newlin family, she began paying Amber to keep silent about her identity. ("Lost Cause")

According to Amber, she and Jeremy lived quietly in Dallas, and were very low-key, spending most of their nights at home watching television. At some point after the dissemination of tainted Tru Blood, Jeremy contracted Hep-V and eventually died in Amber's arms.

Eric and Pam are on the hunt for Sarah Newlin. Willa refuses to come with them because she felt abandoned by Eric. Eric admits to his negligence of Willa, but says that she is their only lead to finding Sarah, since Sarah had dated her father. Willa still refuses to come with them but she will share what she knows in exchange of her freedom. Eric releases Willa and in exchange Willa shares that Sarah has a vampire sister who lives in Dallas. Willa had overheard a phone conversation between Sarah and Amber in which Sarah threatened to have her sent to camp if she ever called the residence again. Eric and Pam traveled to Dallas to speak with Amber, who is shown to be infected with Hep-V. She willingly told them her story and expressed bitterness toward her family for abandoning her. She especially hated Sarah for having helped to create the virus that had killed Jeremy and was now killing her. Amber readily agreed to assist Eric and Pam in locating her, and informed them that Sarah had called her the night before to announce her arrival in town and to beg for refuge. Having turned her away, Amber correctly deduced that Sarah would turn to her parents, who would both be attending a Ted Cruz gala at the Bush Library that night. ("Lost Cause")

The next morning, Sarah broke into Amber's house in broad daylight. Amber immediately ambushed Sarah and attempted to bite her, but began coughing up blood and passed out, presumably from her weakened state and the daytime bleeds. Sarah appeared genuinely saddened to see that Amber was ill.

Later on, Amber is shown regaining consciousness as Sarah watched over her. She was still not happy to see Sarah, and showed no concern for Sarah's troubles with the Yakuza and Eric and Pam. She also had no regard for her parents' deaths, as they too had disowned her. Amber again refused Sarah's pleas for refuge, and expressed disgust for Sarah's audacity to seek her help. Sarah protested that she had become a Buddhist under the tutelage of Guru Sanbir Dutta, and that she had taken the name Noomi (to symbolize that she had become a "new me"). Unimpressed, Amber concluded that Sarah was in extreme denial about her actions and her situation. Sarah continued to ramble on about her new purpose in life being to help people, which fell on deaf ears until she mentioned that she can heal Amber. She went on to explain that there had been an antidote for Hep-V, and when the Burrell camp vampires revolted, she drank all of it while fleeing, thus sealing her insurance as the only thing that can save vampires. She happily gives her blood to Amber. ("Karma")

"May Be the Last Time"Edit

Later that night, the Yakuza, Mr. Gus, Eric and Pam arrived at Amber's house to locate Sarah and end her once and for all. Now alone, Amber answered the door to the amazement of Eric and Pam, who immediately see that Amber's blood veins were gone. They silvered Amber in her living room, and aggressively interrogate her. She stubbornly refused to answer questions about Sarah's whereabouts, insisting that Sarah had changed for the better. Eric then reminded Amber that Sarah was responsible for Jeremy's death. Amber let slip that Sarah herself is the cure, but angrily refused to give up her sister's location. Eric, due to either his illness or rage, hallucinated Sarah in place of Amber, lost his temper, and staked her. ("May Be the Last Time")

A vampire living in seclusion in Dallas, Texas, Amber has learned the art of self control and restraint and more than likely possesses all standard vampire abilities. She got staked accidentally and staking is a common source of true death to vampires. She also experienced "morning bleeds" as seen when she ambushed Sarah which is also a common illness to vampires who don't sleep during the day.

Retrieved from "https://trueblood.fandom.com/wiki/Amber_Mills?oldid=144548"
Community content is available under CC-BY-SA unless otherwise noted.