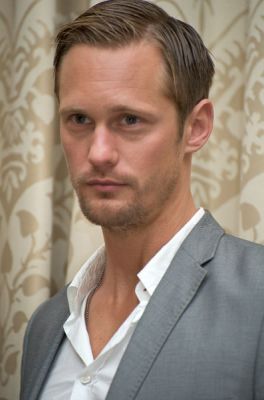 Alexander Skarsgård, born August 25, 1976, is a Swedish actor who plays the role of Eric Northman on the HBO original series True Blood. He is the son of film actor Stellan Skarsgård and, on several scenes throughout the show, has spoken in his native Swedish. Making his debut on the episode "Escape from Dragon House" in the series' first season, Alexander is a starring cast member who plays the role of a vampire. Born in Sweden in 900AD, during the Anglo-Saxon period, he was turned in 930AD, making him over 1,000 years old. The Vampire sheriff of Louisiana's Area 5, which encompasses the small town of Bon Temps, Eric owns the vampire bar Fangtasia in the neighboring town of Shreveport. Playing a major recurring role through the series' first, second, third, fourth, fifth, sixth and seventh seasons, Alexander was last seen in the series' finale episode, "Thank You", in the series' seventh, and final, season.

Skarsgård has acted in several Swedish TV series and movies and served in the Swedish Marines. In 2003 he was nominated for a Guldbagge for male supporting role in the movie Hundtricket - The Movie (English title: The Dog Trick). He revealed to the New York Daily News he used to be an anti-terrorist marine in Sweden.

Since 2005, with his performances in Revelations and The Last Drop, he has taken part in international productions. In 2007 he played one of the main characters, Sgt. Brad Colbert, in the American miniseries Generation Kill.

In 2009, Skarsgård appeared in the music video for pop singer Lady GaGa's "Paparazzi".

In addition to his recurring role on "True Blood", which began its sixth season in 2013, Alexander has four upcoming films in post-production, The East, Disconnect, What Maisie Knew, and Battleship.