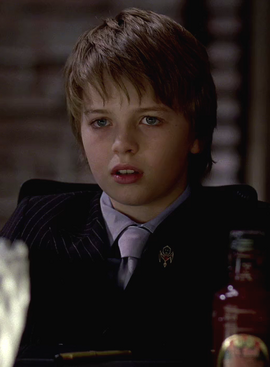 Alexander Drew was an angelic looking, yet impetuous vampire on the HBO original series True Blood. Played by American guest starring child actor Jacob Hopkins, Alexander made his debut on the episode "Authority Always Wins" in the series' fifth season. Born in 1909, and made vampire in 1918 at the tender age of 9, Alexander served the Vampire Authority as a Chancellor. He enjoyed smoking cigarettes and taunting everyone around him, including his fellow Chancellors. Playing a recurring role through the series' fifth season, Alexander met an untimely demise in the Season 5 episode "We’ll Meet Again".

Despite his young human age, Alexander seemed quite adept in his duties as a chancellor of the Vampire Authority. He helped Guardian Roman Zimojic set up the events needed for the Great Revelation and appeared to manage a great deal of the Authorities communication.

Although claiming he was a supporter of the Mainstreaming movement, Alexander secretly preferred the Sanguinista ideology. He saw humans not as equal beings, but as food supply for vampires.

Drew helped draft the Vampire Rights Amendment with Roman Zimojic. Alexander was the Chancellor presiding over Europe, and bragged of having vampire rights bills passed in Scandinavia. A feat which Rosalyn Harris found unimpressive, given the Scandinavians inclination towards liberalism.

In reality Alexander was a Sanguinista, and recorded videos of himself feeding on and killing humans, which he kept as trophies, and sent to other anti-mainstreaming groups.

Alexander is present when Bill Compton and Eric Northman are escorted in the Authority's office. Roman recites a passage from the Vampire Bible, and gives each Chancellor two drops of his own blood. He excludes the traitor Nora Gainsborough, Eric's vampire sibling who is the second progeny of Godric. The chancellors discuss the death of Nan Flanagan (who met the true death because of Bill) and considering if they should deliver the true death to Bill and Eric. Alexander jumps up from his chair and screams "They killed an Authority member!" Roman tells him to calm down and Alexander complies. ("Authority Always Wins")

After Russell Edgington is revealed to be alive Alexander questions negotiating further with Bill and Eric, referring to them as apostates. Roman assures him that he will take his opinion under advisement and sends the chancellors away, except Salome. ("Whatever I Am, You Made Me")

Roman learns from Nora of the existence of a second traitor on the council. After ordering a search of all the Chancellors' quarters, he discovers video footage of Alexander feeding on, and killing a human woman, which Alexander himself had then sent to various Sanguinista groups around the globe, along with the encrypted message "sympathy and solidarity". Alexander attempts in vain to defend himself, by claiming to have been trying to infiltrate the extremists. Roman, however, sees through Alexander's lies, and pulls him from his chair by the hair, and stakes him in mid-air, in front of the assembled Chancellors. ("We’ll Meet Again")

Retrieved from "https://trueblood.fandom.com/wiki/Alexander_Drew?oldid=139715"
Community content is available under CC-BY-SA unless otherwise noted.