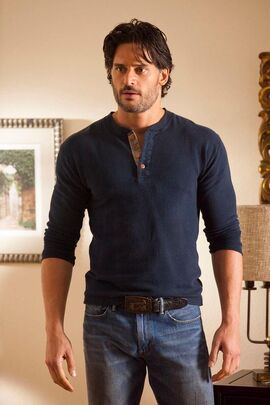 "That's what death does, rips the ground right out from under your feet, makes you wonder if it was ever there to begin with, but it was and it will come back."
―Alcide Herveaux[src]

Alcide Herveaux was a werewolf on the HBO original series True Blood. Played by American starring actor Joe Manganiello, Alcide, also played by "Thunder", in wolf form, and by American co-starring actor Blake Michael during flashbacks of a younger Alcide in the Season 5 episode "Everybody Wants to Rule the World", made his debut on the episode "It Hurts Me Too" in the series' third season. A werewolf packmaster living in Shreveport, Louisiana, Alcide played a recurring role through the series' third, fourth, fifth, sixth and seventh seasons. Owning a construction company with his father, Jackson Herveaux in their hometown of Jackson, Mississippi, Alcide was one of Sookie Stackhouse's main love interests, until his untimely demise on the episode "Fire in the Hole" in the series' seventh, and final, season.

Alcide was a loyal, respectful and decent man who displayed great loyalty toward his friends and family. Unlike many other werewolves, he was also adept at controlling his animalistic nature. For this reason, he prefers to live apart from werewolves as a lone wolf.

Alcide's father, Jackson, had been the packmaster of Jackson, Mississippi, and initiated Alcide and his longtime girlfriend Debbie Pelt into the pack as youngsters. Jackson teaches the young wolves that each member must put the needs of the pack before their own, and to balance their nature between human and beast. Alcide later becomes ashamed of his father after he is abjured for stealing from the pack. Despite his rocky relationship with him, he takes over Jackson's debt to the vampire Eric Northman, and works for him as a bodyguard for Sookie Stackhouse after the vampire Bill Compton was kidnapped by werewolves from Jackson, Mississippi.

Alcide later became the packmaster of Shreveport after killing the former packmaster, Marcus Bozeman. He was reluctant to accept the position at first, but later accepted the role when his former pack began to erode under the poor leadership of JD Carson, who was addicted to vampire blood and forced his pack to become subservient to the vampire Russell Edgington.

As packmaster, Alcide behaved very uncharacteristically, as he let the power of being alpha go to his head. He became much more aggressive and receptive to sexual favors from the werebitches in his pack. However, he never completely abdicated his sense of morality. His pack began to distrust him when he attempted to stop them from killing the members of the well-meaning human organization Vampire Unity Society; according to pack law, threats of exposure must be eradicated. When it was discovered that Nicole Wright, the last surviving member, escaped alive and was being aided by his friend, shapeshifter Sam Merlotte, he faced a dilemma as packmaster: kill them both to appease his pack, or allow them to live and deceive his pack. He chose the latter, but was exposed by his then-girlfriend Rikki Naylor, who then challenged him for the role of packmaster. She lost the fight, but he refused to kill her and resigned his role as packmaster anyway. As his last act as packmaster, he saved Nicole and her mother from the pack and returned them to Sam. He returned to his old life as a lone wolf.

Alcide embarked on a relationship with Sookie Stackhouse at the end of Season 6, after a long friendship that included a lot of repressed romantic feelings from both of them. He was killed trying to save Sookie in the third episode of Season 7 when he was shot to death by human vigilantes.

Alcide was a werewolf, which made him generally physically stronger than regular humans, shapeshifters, and werepanthers. Because of his considerable size and strength, he was stronger than most other werewolves. He was able to overpower newborn vampires with ease, but he was still physically weaker and slower than older vampires, even in his wolf form. When he consumed vampire blood, he became nearly unstoppable, proving to be stronger than the other weres on V, like JD.

As a werewolf, Alcide had the ability to shift from human form into werewolf form at will, except during the nights of the full moon, in which he shifted spontaneously. His sense of smell was much stronger than humans', even while in human form. As a werewolf, he was a skilled tracker when pursuing a target. His wolf form had white fur and orange eyes.