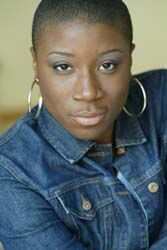 Aisha Hinds, born November 13, 1975 in Brooklyn, New York, is an American actress who plays the role of Nancy LeGuare, also known as "Miss Jeanette", on the HBO original series True Blood. Making her debut on the episode "Burning House of Love" in the series' first season, Aisha plays the role of an employee at De Soto Pharmacy. A con artist who reinvented herself as a witch doctor, Miss Jeanette, who tricked Tara Thornton and her mother Lettie Mae into submitting to exorcisms, Aisha is a guest starring actress who plays a recurring role through the series' first, second, and third seasons. Meeting an untimely demise on the episode "You'll Be the Death of Me", at the end of the series' first season, Aisha appears in flashbacks through the series' second and third seasons, and was last seen on the episode "Evil is Going On", at the end of the series' third season.

Retrieved from "https://trueblood.fandom.com/wiki/Aisha_Hinds?oldid=139710"
Community content is available under CC-BY-SA unless otherwise noted.