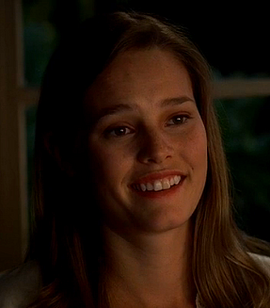 Adilyn Braelyn Charlaine Danika Bellefleur, a telepathic faerie formerly known as Number Four, is a Halfling on the HBO original series True Blood. Played by American actress Bailey Noble, Adilyn makes her debut on the episode "Save Yourself" in the series' fifth season. The Halfling daughter of Bon Temps, Louisiana sheriff Andy and Maurella a mysterious fae, Adilyn had three sisters, Braelyn, Charlaine and Danika, whose names were given posthumously. She uses their names as her middle name in their memory. Playing a recurring role through the series' sixth and seventh seasons, Adilyn was last seen on the series' finale episode, "Thank You", in the series' seventh, and final, season.

Adilyn exhibits a very sweet efflorescence. She is very genuine and tries to look for the good in people. And tries to do her best to help people.

Naivety is the part that hurts her. For being only two weeks old, she falls for everything most people tell her because she thinks they are good without distinguishing the good from the bad.

The lack of knowing makes her extremely inquisitive. Often using her telepathy to help that. Which often gets her into trouble.

A pregnant Maurella visits Merlotte's and asks Andy for salt. She downs a whole shaker. As he tries to explain their affair to Holly, Maurella's light breaks and she goes into labor. Adilyn was the fourth daughter of Maurella and Andy to be born. ("Save Yourself")

Andy finds himself overwhelmed with four new babies to take care of. Terry and Arlene help Andy with becoming a new father.

Andy wakes up to a surprise when he realizes his four infant fae babies have now grown significantly overnight to what seems like three year old children. Terry and Arlene are awoken by Andy's shock. They scream themselves to find four grown children in their house. ("Who Are You, Really?")

Wanting to party when they were still young, the four faeries sneak out of the house in the middle of the night. They stole some of Arlene's clothes and their fathers car to go buy some alcohol. In the liquor store they meet Jessica and decide to go with her and party at Bill's place.

When the four sisters try to leave Bill's house, Jessica becomes overcome with bloodlust. Unable to control herself, Jessica attacks them and drains their blood. Adilyn was the only one to survive the attack. ("At Last")

Andy later finds Adilyn and takes her to the Bon Temps Police Station where he gave her some vampire blood to heal her. After she woke up he finally gave her the name "Adilyn" along with Holly. ("F**k the Pain Away")

After Terry is killed Adilyn goes to pay her respects. When Sookie arrives they have a short telepathic conversation in which Adilyn reveals to her that she is Andy's daughter (much to Sookie's surprise). When Bill arrives Adilyn goes upstairs with Portia and the children Mikey, Lisa, and Coby to make sure Adilyn won't be in danger with Bill. ("In the Evening")

Adilyn is shown to be sitting at the dining table with Arlene, Holly, and her dad, Andy. Andy gets up to get some coffee to which Adilyn asks if she can have some. Andy refuses telling her she is not even two weeks old yet. She uses her telepathy to read Arlene's mind after Lafayette tells them about Terry's safety deposit box. Adilyn getting upset after Arlene blamed her and her sisters. She gets scolded by Arlene being told that she needs to learn not to read people's mind. With both Adilyn and Arlene running off crying. Holly's boys, Wade and Rocky, come by to pickup Adilyn because their mom told them she was having a bad morning with her accepting after seeing the liquor bottle. Adilyns' make-out session with Wade is cut short with the arrival of Eric. When Eric was glamouring the boys, Adilyn runs off to be later captured and fed upon by Eric. Andy finds Adilyn running on the street and gets out of his police car to comfort her seeing she has been bitten, stating he isn't mad when she asks him and they embrace each other. ("Dead Meat")

Telepathy: Adilyn possesses the normal abilities of a Faerie. One of her abilities is telepathy. Which often gets her into trouble with her family for meddling.

Photokinesis: She herself stated, that whilst she doesn't know how to reach the Faerie plane, she does know how to use her light. This hints, that she has a degree of control over her ability, but lacks the training needed for advanced Fae Magic.

Dimensional Transportation: Adilyn eventually manages to transport herself, Jason, Andy, Bill, and Violet to the Fae plane. She accesses this power through fear, as she didn't have the conscious control over Dimensional Transportation, therefore Violet had to scare her into doing it. Also, after Warlow used his light to seal the room in which Jason, Andy, and Adilyn were locked up in, Adilyn was able to use her own light to undo the fae-enchanted lock, even though it took considerable effort in doing so.

Due to being a Halfling however, her magic is finite. Meaning, if she uses up all the power she holds, she will become fully human like all the other halflings. Being a halfling, she is also immune to glamouring.

Retrieved from "https://trueblood.fandom.com/wiki/Adilyn_Bellefleur?oldid=145037"
Community content is available under CC-BY-SA unless otherwise noted.