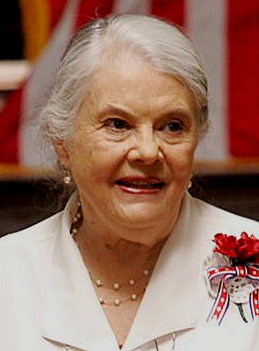 "You're always careful, Sookie, about what counts, and I can depend on that."
―Adele Stackhouse[src]

Adele was a very kind-hearted, motherly figure, with even Tara Thornton's mother crediting her for raising Tara when she couldn't. She is one of the few characters who supports Sookie's relationship with Bill, and is greatly interested in Bill's historic knowledge of Bon Temps, as she is head of the "Descendants of the Glorious Dead", an organization devoted to honoring the memory of the Civil War. She helped out Bon Temps in many ways. She was always open and loved gossip. When Adele died, many people of Bon Temps attended her funeral and wondered whether she had deserved to die like she had. Sookie's comfort place is the cemetery where her grandmother was buried.

Adele was married to Earl Stackhouse. Her husband vanished into the Faerie Realm shortly after her granddaughter Sookie turned five. Adele assumed he had died and never suspected the truth of his disappearance or the secret of the Stackhouse family blood.

When her son and daughter-in-law died in a flash flood, Adele was left to take care of her grandchildren, Sookie and Jason. Adele was always a motherly figure, not only to her two grandchildren but also to Tara Thornton. Tara would always come to Adele's house when she wanted to escape from her mother's drunken behavior. When Sookie was still young, she revealed to Adele that Adele's brother Bartlett had molested her. Adele believed Sookie and threw Bartlett out, refusing to ever speak to him again.

Adele was very interested in local history, particularly the Civil War period and founded a local historical club called the "Descendants of the Glorious Dead."

Sookie tells her Gran about the vampire she had met at Merlotte's. Adele is extremely interested in hearing about his past and any local history with which he was familiar. When she meets Bill, she is delighted to hear his memories of Jonas Stackhouse building the very house in which she lived. She extended the invitation for him to come and speak in front of her Civil War historical club the Descendants of the Glorious Dead. ("The First Taste")

During the build-up to Bill coming to speak to the Descendants of the Glorious Dead, it is clear not everyone in town is comfortable with Adele's decision. She makes it known that she is staunchly behind Bill and describes him as "a perfect gentleman." Following the club meeting, Sookie returns home to find her Gran dead in a pool of blood in their kitchen. This makes Adele the third victim of the Bon Temps killer. ("Sparks Fly Out")

"To Love Is to Bury"[edit | edit source]

"You'll Be the Death of Me"[edit | edit source]

Her murderer is later discovered to be Drew Marshall, who posed as Rene Lenier, a Cajun and close friend of Jason Stackhouse. ("To Love Is to Bury") ("You'll Be the Death of Me")

Sookie visits Moon Goddess Emporium in hopes of getting information from Marnie. She asks for a reading. During the reading, Gran speaks to Sookie. She tells Sookie to run from Marnie. ("Me and the Devil")

Her warning proves worthwhile as Marnie pursues a bitter quest for revenge on vampires including Sookie's lovers Bill and Eric. Marnie is eventually killed but takes possession of Sookie's friend Lafayette.

When Holly summons the souls of the dead on Samhain, Adele is among the risen souls. She helps Antonia reason with Marnie, allowing Marnie to let go of her baggage and peacefully enter the next life. Before leaving with the rest of the deceased, she tells Sookie that she'll always be in her heart. ("And When I Die")

Adele makes a small cameo in the final episode. In a flashback to when Sookie was little, her and Tara are having a conversation and Sookie says she will never be able to be with someone because of her mind reading abilities. Adele overhears this and is angry with Sookie and tells her never to say anything like this again and she is the way God intended her to be.

Retrieved from "https://trueblood.fandom.com/wiki/Adele_Stackhouse?oldid=145054"
Community content is available under CC-BY-SA unless otherwise noted.