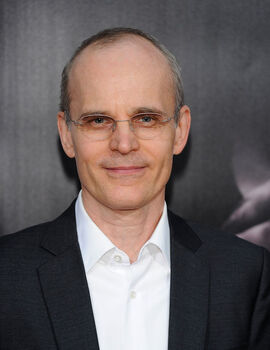 Željko Ivanek, born August 15, 1957 in Ljubljana, Slovenia, (formerly Yugoslavia), is a Slovenian-American actor who plays the role of Jorge Alonso de San Diego, or, more simply, The Magister on the HBO original series True Blood. Making his debut on the episode "I Don't Wanna Know" in the series' first season, Željko was the pride of his relatively poor family when ordained as a monk in 1484. Jorge was a fervent believer in the necessity of the Spanish Inquisition, and became one of the most feared "inquisitors" in Seville, overseeing countless trials and executions, including some of his own relatives. When made vampire against his will, as retribution for his role in the Counter-Reformation, he turned his misfortune into an opportunity to continue to pursue the same goals he had in life: rooting out subversives and heretics to uphold the common good.

Posing as a human for centuries, he served as an adviser to Soviet dictator Joseph Stalin and as Adolf Eichmann’s right-hand man. Shortly after World War II he was tapped to be Vampire Magister of North America, where he relished his power to implement the laws of his own kind for eternity. Playing a recurring role through the series' first, third, and seventh seasons, Željko was murdered by Russell Edgington, the Vampire King of Mississippi, after he pronounces him and Queen Sophie-Anne man and wife, meeting an untimely death in the Season 3 episode "Hitting the Ground", and was last seen in a flashback on the episode "Death is Not the End" in the series' seventh, and final, season.

In 2008, Ivanek earned a Primetime Emmy Award for his portrayal of Ray Fiske on the critically acclaimed series "Damages." Most recently, he starred as JJ on "Big Love." His other notable television work includes the miniseries "John Adams," recurring roles on "Heroes," "Homicide: Life on the Streets," "24," "True Blood" and "Oz," as well as numerous guest appearances.

In addition, Ivanek is also a veteran of over 20 feature films including "In Bruges," "Live Free or Die Hard," "The Hoax," "Dogville," "Unfaithful," "Black Hawk Down," "Hannibal," "Dancer in the Dark," "A Civil Action" and "Donnie Brasco," to name a few.

Ivanek is a graduate of Yale University and The London Academy of Music and Dramatic Art.